The Department of Telecommunications (DoT) will begin issuing notices to telecom companies after the January 24 deadline for payment of AGR (adjusted gross revenue) dues, set by the Supreme Court, lapses, a senior official said.

This comes even as the apex court on Tuesday agreed to list the “modification petition” filed by Bharti Airtel, Vodafone Idea and Tata Group for “sometime next week”. The firms have sought a change to the 90-day deadline for payment of Rs 1.47 trillion worth of AGR dues, and permission to engage with the DoT on the terms and timing of payment.

It is learnt that the DoT will issue notices in compliance with the apex court’s October 24, 2019, order that stated that the AGR-related dues need to be paid by January 24.

“We cannot go against the SC. Therefore, we have to recover dues from the companies according to their order,” an official said. He added that if the companies get any relief from SC next week, their payments will be adjusted for any future settlement.

Meanwhile, leading telecom companies are holding hectic parleys as they consider skipping the deadline for payment of AGR dues.

Rajan S Mathew, director general of Cellular Operators Association of India (COAI), said: “I understand that most of the telcos may wait till the hearing of the new petition before they make the payment.”

Mathew said there were enough judicial precedents, where the court had not executed its order, pending further adjudication in the same court. He said that they will continue to hold talks with DoT and are hopeful that no coercive action will be taken, though there has been no official communication to that effect. 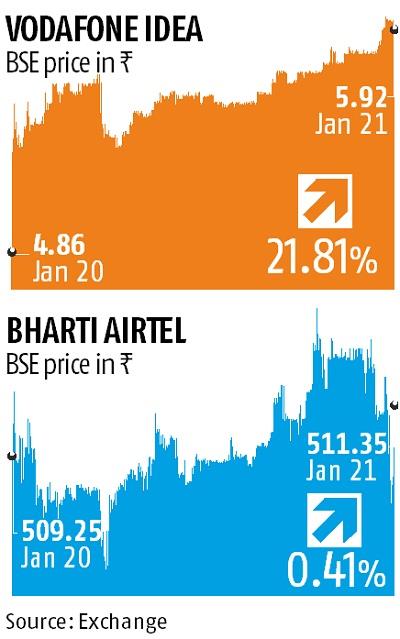 This view was echoed by the lawyer Shally Bhasin, who represented Vodafone Idea. Bhasin told TV channels that no one was going to pay the AGR dues and that telcos have requested the court to let them discuss the matter with DoT and finalise the payment plan.

However, Bharti Airtel declined to comment on the issue, and it is not clear whether it will pay some money upfront or follow the same line as Vodafone Idea.

In the case of Jio, which was not part of the review petitions, it is expected to pay by the deadline. Jio declared in its recent financial results that it has estimated the liability for the period from 2010-11 to 2018-19 at Rs 177 crore for licence fee and spectrum user charges (SUC), in view of the SC judgment.

Earlier, some of the telcos were thinking of paying part of the sum due — up to 20 per cent — before the deadline, as non-payment would allow DoT to encash on their bank guarantees.

Advocate C A Sundaram, who is representing a telco, said companies were not disputing the payment to be made, rather they wanted to work out a fresh schedule. The telcos also pushed for an open court hearing, but the CJI said that would be decided by the Bench concerned.

The court, on October 24, had ordered telecom companies to pay their licence fee and SUC dues within 90 days. Failure to pay the dues could lead to contempt of court. However, a senior executive of one of the telcos pointed out: “We don’t expect any coercive action from DoT if we wait for the hearing to happen next week, which is after the deadline.”

The plea, apart from putting the telcos’ plan for a curative petition on the backburner, is aimed at not only getting more time for payment, but also, if permitted by the apex court, to negotiate with the DoT for a staggered payment scheme, just like it was able to get for spectrum.

The news that telcos might get more time led to a boost for Vodafone Idea, which has the largest bill to pay. There are fears that the firm might be forced to close shop if there is no relief. However, with the firm’s lawyers saying the company wants to stay in the business, its share price closed up 22.68 per cent at Rs 5.95 on the bourses. The shares of Bharti Airtel, however, fell marginally by 0.07 per cent to close at Rs 508.35.

After two months of positive…

Despite recovery in exports to…