The coronavirus crisis continues to be highly fluid, and for this reason, the ability to accurately quantify its current and near-time economic impacts on the Chinese and world economies is impossible. To put it bluntly, the figures thrown around are nothing more than “back of the napkin” assumptions. Regardless, the current and near-future best guess financial figures for every industry are dire as everyone is in crisis management mode. Notwithstanding, let’s take a beyond the horizon look at a post-coronavirus China.

The good news is that once crisis eventually comes to an end, the ensuing economic, financial and social damage will lead to steps to recovery.

The widespread mandatory lockdowns encompassing almost 60 million Chinese inhabitants mostly in the province of Hubei where the virus emerged in the city of Wuhan perversely serve as an economic cleansing – a pause and then reset – that will provide the fast-forward of what China actually looks like based on economic fundamentals.

After the coronavirus is contained, Chinese and foreign businesses will undertake a deep assessment of how to move forward. For sure China-specific contingency plans will be developed for future crises such as the coronavirus. Everyone was shockingly unprepared because a Black Swan calamity in the # 2 economy in the world was remote. An explanation might be that not only was the 2002-2003 SARS outbreak considered “ancient history”, it never resulted in mass quarantine or adversely impacted an exploding Chinese economy.

The challenge now is post-coronavirus China with respect to economic growth and its impact domestically and internationally. I believe that the coronavirus serves as a catalyst to its other troubling crisis that I articulated in my 31 January 2020 SA article China’s Crisis Management Stress Test that fast forwards China to its actual economic growth figures as dictated by fundamentals and exposes and confirms embarrassing flaws in the system.

With every business adversely impacted by the coronavirus outbreak, it’s unlikely that any of them will want to return to pre-outbreak levels because of unprecedented demand destruction across all industries. Recovery and ramp-up will be painfully slow, and businesses will be justifiably quite cautious because it will be impossible to assess the cross-section of inter-connectivity and their unique industry-specific operational and financial abilities and needs. The challenge is that businesses usually face a supply issue, rarely a demand collapse which makes it difficult to project growth. No business is bad business.

Globally, the IMF has unofficially reported world economic growth at about 3% in 2019. As the coronavirus progresses, China, as the world’s #2 economy under lockdown, will certainly put downward pressure on global growth towards 2.5%, which the IMF considers as recessionary. Domestically, China’s 2020 growth GDP could fall to 4% or even lower contingent on the virus’s strength and duration.

On the micro-level, businesses and private citizens realize the harsh realization that government protection with accurate and timely information is not forthcoming with respect to personal survival, not economic well-being. Chinese governmental leadership will not change its approach to handling this or any other future crisis and will continue to operate within the same rigid political protocol framework.

Chinese businesses may be more pragmatic and put in place internal protocols to handle future problems up to the point that it doesn’t make the government lose face with respect to their inability to handle such dilemmas. The threshold will probably be not to distribute any future protocols rather they will be held privately by a tight trusted circle of executives.

Foreign businesses operating in China will reduce operations, develop emergency protocols and disaster recovery plans usually reserved for politically volatile countries. Employee evacuation plans are par for the course typical for companies operating in the extraction industries and will henceforth become standard procedure in China, the # 2 economy in the world.

During a protracted lockdown with respect to the coronavirus, China’s heavily indebted enterprises (governmental and private) may not be able to retain their workers and be forced to lay them off. This could create and exacerbate social instability; a quickly manifesting threat because it’s an issue of life or death, survival not political freedom like in Hong Kong. Few in the current generation know about economic hardship are accustomed to a high standard of living.

On the street, this crisis has indelibly changed the Chinese citizens’ opinion on the government’s ability to protect them. The future mindset will be one of self-preservation de facto future urban preppers: food, medicine and survival necessities. It’s the Chinese government’s worst nightmare: losing credibility in the medium to long term for immediate control – and ironically pushing the citizenry towards potential Hong Kong activism but on a higher level – literally life or death survival vs political freedom. It’s a potential powder keg if the crisis worsens.

From a political perspective, regardless of whether democracy or autocracy, the “high table” leadership is rarely agile and doesn’t engage in behavior modification even if it means their long-term survival. They deal problems exclusively with a blunt instrument. In China, dissent is politically dangerous because there are too many powerful interests endemic throughout the economy. 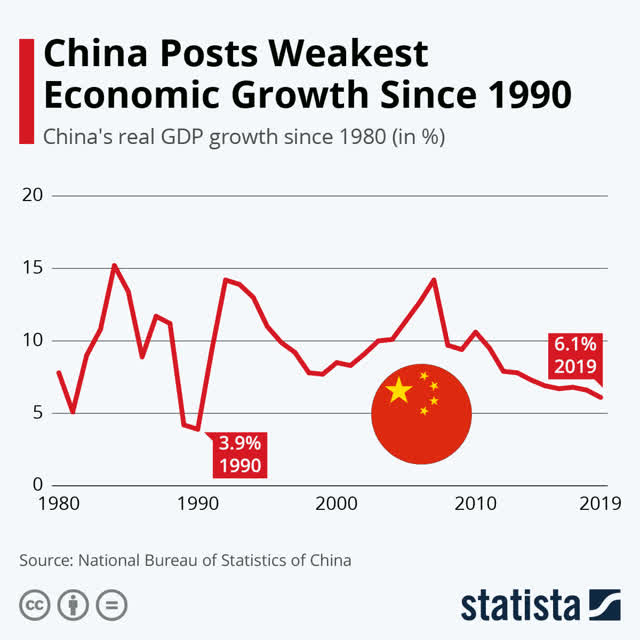 As a part of this economic deceleration, the article America Should Beware a Faltering China in Foreign Affairs 28 October 2019 provided several red flags that China is facing. To paraphrase them:

In the article As Trade War Drags On, China Revs Up its Debt Machine published by The Council on Foreign Relations, 2 December 2019, China’s tactic to meet its annual growth targets is through debt. According to the article’s chart below, the increase in non-performing loans to achieve their growth target is rather disturbing. 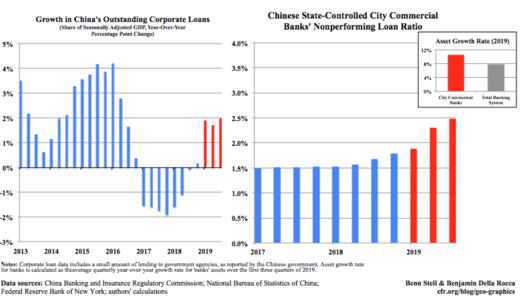 To combat the spread of the coronavirus, China has implemented the largest quarantine in human history with an estimated 60 million Chinese inhabitants, which wasn’t done with the SARS outbreak in 2002-2003. Despite its draconian “kettling” tactic, the Chinese government is exacerbating the crisis by keeping the Centers for Disease Control and Prevention (CDC) and World Health Organization (WHO) locked out, Chinese citizens locked in as articulated in The New York Times article 7 February 2020 CDC and WHO Offer to Help China Have Been Ignored for Weeks. This policy strongly suggests that the resolution to epidemic will take far longer than anticipated without overwhelming outside medical and technical expertise.

The Chinese medical system is already overwhelmed and approaching a breaking point. With respect to the Chinese citizenry infected or at high risk of infection, for lack of a better expression, “The cavalry isn’t coming.” Social frustration is beginning to bend and fray as expressed through social media. The last thing the Chinese government needs is a situation to provoke its citizenry into a panic that devolves into a Hong Kong style social chaos. If Hong Kong law enforcement could barely contain the political protests, imagine what would happen in several geographically close megacities with citizens literally battling for their lives instead of political freedoms?

Because of the extreme nature of the crisis, this possibility is closer to reality than anyone cares to admit. There have been increasing challenges by the public against law enforcement article Reports of Society-Police Conflicts in China, as published in The National Bureau of Asian Research, 25 November 2019, a growing trend before the coronavirus outbreak.

For all the aforementioned reasons, I’m quite bearish not only on firms operating in the Chinese market but foreign firms that rely heavily on Chinese tourism to their respective countries particularly the luxury market and supporting industries such as air travel and hospitality.

Disclosure: I/we have no positions in any stocks mentioned, and no plans to initiate any positions within the next 72 hours. I wrote this article myself, and it expresses my own opinions. I am not receiving compensation for it (other than from Seeking Alpha). I have no business relationship with any company whose stock is mentioned in this article.