The movement, known as “Move Oregon’s Border for a Greater Idaho,” is hoping to expand the borders of the Gem State through the inclusion of more than a dozen bordering rural counties now in Oregon.

Mike McCarter, chief petitioner of the movement says the group has gotten the “green light” in at least three Oregon counties — Josephine, Douglas and Umatilla — that would start the first step in the secession process, which would be collecting signatures to eventually end up on the November 2 ballot.

“Rural counties have become increasingly outraged by laws coming out of the Oregon Legislature that threaten our livelihoods, our industries, our wallet, our gun rights, and our values,” Mike McCarter, one of the chief petitioners of the movement, wrote on the website for the Greater Idaho movement.

“We tried voting those legislators out, but rural Oregon is outnumbered and our voices are now ignored. This is our last resort,” McCarter added.

Oregon’s state government is under Democratic control, led by Democratic Gov. Kate Brown. Idaho’s two-chamber state legislature are both controlled by Republicans and Gov. Brad Little is also a Republican. The growing tide of disgruntled conservative Oregonians is underscored by the recent power struggle Brown faced when House Republicans
tried to remove her from office in 2019 following an
acrimonious legislative session. Last year’s legislative session included a standoff over a contentious cap and trade climate bill aimed at lowering greenhouse gas emission in a state known for its timber industry.

Brown’s office did not immediately respond to a request for comment.

The movement has support from some Republican lawmakers in Oregon’s legislature.

“Oregon is largely controlled by one party that does not represent the entire state effectively, making the urban and rural divide striking,” said Sen. Herman Baertschiger, the Republican leader in the state Senate who represents Josephine County, in an email to CNN.

“Democrats should be paying attention to how unhappy these Oregonians are with the current regime to seek secession from Oregon. I would welcome the idea to serve on the Greater Idaho legislature!” 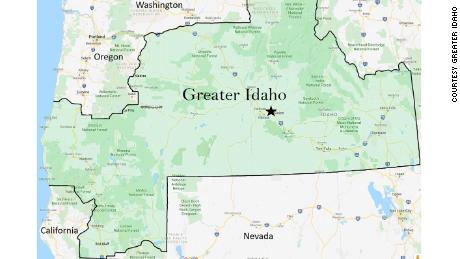 Rep. Gary Leif, a Republican who represents Douglas County in the Oregon House of Representatives, supports residents leaving the state. Leif even has a poster of the “Greater Idaho” map in his office, which “people are loving,” he said in an email to CNN.

“The Greater Idaho would then be the only West Coast state that is a conservative red coastal state. We would then truly be representing conservative values with rural constituents,” Leif added. “I believe that Oregonians will support this to leave Oregon for Idaho. That is what happens when you get a super majority of either party in control.”

In total, the Greater Idaho movement is looking to add roughly 20 conservative Oregon counties to Idaho,
according to the campaign’s website. The group cites economic advantages, religious liberty and infringements on residents Second Amendment rights as reasons behind their push.

McCarter also noted that the effort could “take two to three years” due to the complicated bureaucratic process involved in a secession, but said the movement ultimately is about signaling the unhappiness rural conservatives in Oregon have with the state legislature.

The grand plan for the movement also includes six northern counties in California, according to the Greater Idaho website.