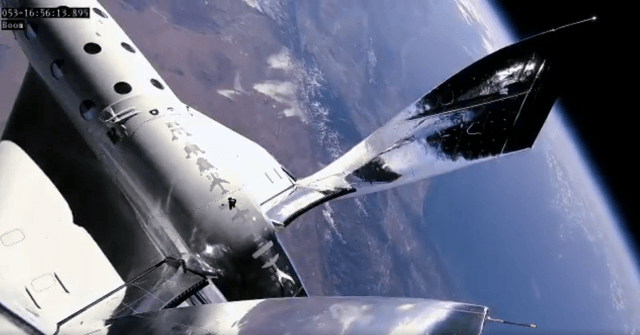 Still image from the boom of SpaceShipTwo (via Virgin Galactic’s Twitter page).

Since early December, shares of Virgin Galactic (NYSE:SPCE) have more than quadrupled in value.

The spike in SPCE shares – and in the huge volume in call options traded on those shares – was the subject of a Bloomberg article Tuesday by Luke Kawa and Bailey Lipschultz (“Virgin Galactic Frenzy Starting To Look A Little Like Tesla Run”). In it, the authors noted that call option volume had jumped from a notional value of about 0.5% of Virgin Galactic’s market value at the end of 2019 to nearly 17% of its market value this week. They pointed out that traders buying calls on the stock could itself be driving the stock higher:

Derivatives that can extract even more gains from Virgin Galactic have become a favorite among retail investors, judging by activity on message boards like r/wallstreetbets. When a fresh option is written, a dealer who sells it will typically hedge their exposure by buying a certain amount of the stock so as not to accumulate a short position, and will tend to buy more shares in the event of a continued rally.

To give you a flavor for the Reddit message board Bloomberg linked to there, it includes messages such as “$SPCE will make me a millionaire“. If you’re long SPCE and want to add some downside protection here, given the bubbly recent price action, we’ll look at a way of doing so below.

Because Virgin Galactic shareholders from last year are sitting on large gains, I decided to use a larger decline threshold when scanning for hedges for it. I scanned for the optimal, or least expensive, static hedges to protect against a greater-than-34% drop in 1,000 shares of the stock by next January. Here’s what I found.

As of Tuesday’s close, it was too expensive to hedge SPCE against a >34% decline by next January with optimal puts. If you scanned for them, you received this error message notifying you of that. 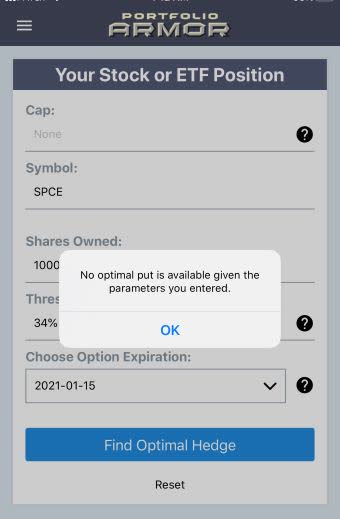 What that error message means, in this context, is that the least expensive puts to protect against a >34% decline in the stock over this period cost more than 34% of your position value.

If you were willing to cap your possible upside at 38% by next January, this was the optimal collar to protect against a >34% drop by then. 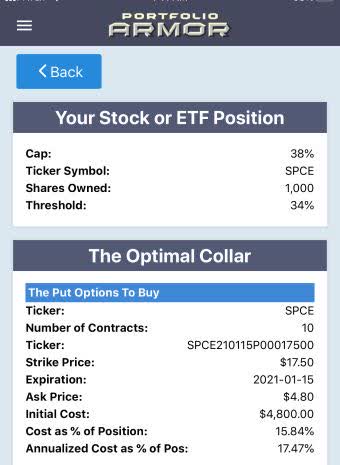 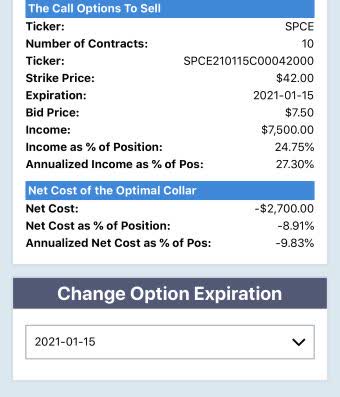 Here, the net cost was negative, meaning you would have collected a net credit of $2,700, or 8.91% of position value, when opening this hedge, assuming you placed both trades (buying the puts and selling the calls) at the worst ends of their respective spreads.

Recall that the collar above was capped at 38%. That was your possible upside not taking into account hedging cost. To get your possible upside net of that, you need to subtract the hedging cost from the cap: 38% – (-8.91%) = 38% + 8.91% = 46.91%. While a nearly 47% decline may seem sedate compared to the ride some of you have had so far on Virgin Galactic, it may be an approach to consider here. Bear in mind that, if the stock corrects between now and January, you can potentially use that opportunity to buy back the short leg of your collar at a much lower price, thus removing your upside cap.

I take a unique approach to security selection in my Marketplace service, working to generate better returns by reducing outliers. The top names I select using this process are significantly less expensive to hedge than Virgin Galactic. You can read about my approach in this article, “Better Returns By Reducing Outliers“.

Disclosure: I/we have no positions in any stocks mentioned, and no plans to initiate any positions within the next 72 hours. I wrote this article myself, and it expresses my own opinions. I am not receiving compensation for it (other than from Seeking Alpha). I have no business relationship with any company whose stock is mentioned in this article.