“Zombies,” airing on Disney Channel, follows the 2018 musical, about a cheerleader’s unlikely romance with a teenage zombie.

According to Disney, the original “Zombies” was the year’s top-rated cable telecast among girls age 6-11 and 9-14, as well as tweens (that is, the 9-11 cohort) in general. (The family-friendly zombies don’t eat brains in this version of the mythology, thanks to the wonders of modern medicine.)

“To All the Boys,” meanwhile, again stars Lana Condor and Noah Centineo, who paired up at the end of the original Netflix movie, “To All the Boys I’ve Loved Before,” in which Condor’s character Lara Jean accidentally had her old love letters sent to boys on whom she had crushes growing up.

Here, Lara Jean discovers that “happily ever after” isn’t always easy, as another boy enters the picture, while her relationship with Centineo’s Peter hits some snags.

Netflix has an assortment of Valentine’s Day movies available to subscribers, and not to be outdone, the fledgling competitor Disney+ is touting its own roster of appropriately themed fare, in addition to what can be found on cable. 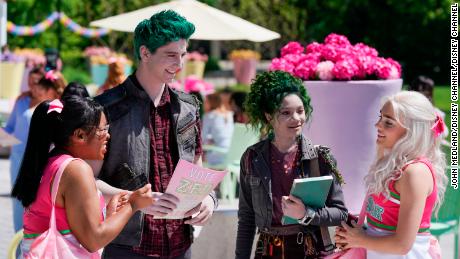 That menu includes animated movies like “Cinderella,” “The Little Mermaid” and “The Aristocats;” the reality show “Disney’s Fairy Tale Weddings;” and even selected Valentine’s Day-themed episodes of “The Simpsons,” which
Disney acquired in its deal for 20th Century Fox.
As for the aforementioned movies, both cater to adults, and in one case, senior citizens:
“Ordinary Love” stars Liam Neeson and Lesley Manville (an Oscar nominee for “Phantom Thread”) as a long-married couple whose relationship is dealt a setback when they learn of her breast-cancer diagnosis.
Elsewhere, Issa Rae and Lakeith Stanfield star in
“The Photograph,” with Rae as a woman looking into her mother’s past, and Stanfield as a journalist who joins in that quest.

It’s just the first of two romances featuring Rae that will come out in the next few months, the other being “The Lovebirds,” a comedy with Kumail Nanjiani (“The Big Sick”) that premieres in April.

Until then, those with Valentine’s Day on their minds have no shortage of options. And based on how the weekend goes, we’ll see if any of it warrants a “P.S.” down the road.