“We need to get everybody’s health care plan out here,” the Massachusetts Democrat said before pointedly calling Klobuchar’s plan “like a Post-it Note — insert plan here.” 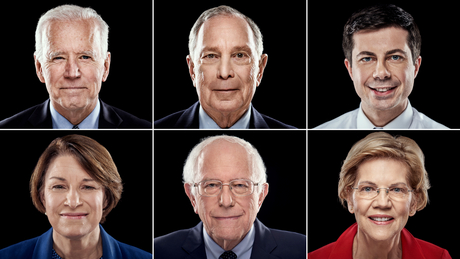 Klobuchar shot back, laughing, that she took personal offense at the jab “since Post-it Notes were invented in my state” before launching into a larger rebuke of “Medicare for All.”

“The truth is that when you see some troubled waters, you don’t blow up a bridge, you build one,” the Minnesota Democrat said. “And so we need to improve the Affordable Care Act, not blow it up.”

The exchange laid bare the enduring division within the primary over
Medicare for All, a plan backed by Warren and Sen. Bernie Sanders of Vermont that would enroll Americans in a government-run program with no premiums or out-of-pocket charges.

Other candidates, including Klobuchar and former Vice President Joe Biden, are supporting more moderate proposals that would expand coverage but retain a role for private insurance.

Turning to former South Bend, Indiana, Mayor Pete Buttigieg — who has put forward a plan he’s calling
“Medicare for All Who Want It” — Warren asserted that his approach is a “thin version of a plan that would leave millions of people unable to afford their health care.”

Buttigieg laughed off the comment, saying he’s “more of a Microsoft Word guy,” and insisted “there is no such thing as an uninsured American” under his plan.

Warren then criticized Sanders’ handling of Medicare for All. “His campaign relentlessly attacks everyone who asks a question or tries to fill in details about how to actually make this work,” she said. “And then his own advisers say it probably won’t happen anyway.”

“Look, health care is a crisis in this country,” she added. “We need as much help for as many people as quickly as possible.”